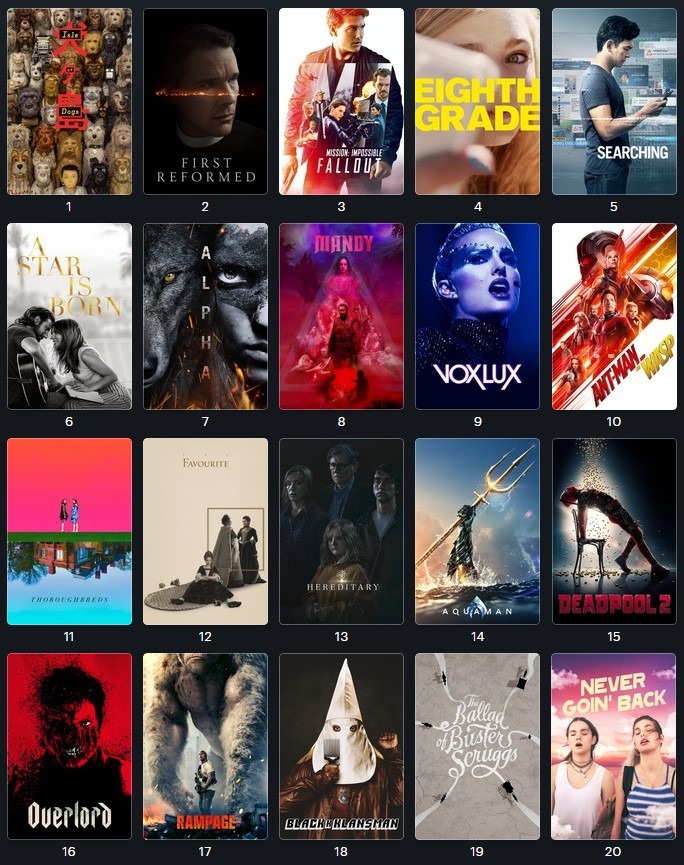 I used to do this over on my Music by David Rosen website, but as this is the first year I’ve had Piecing It Together, I think this website is the new place to do my personal end of year lists.

As I always do, I’ve kept a running list of all the movies I saw this year… And ranked them all in order. We just did a Top 10 Movies of the Year Special Episode of the Podcast too which you definitely should listen to, but without further ado, here are all the movies I saw this year, in order (personal preference, not trying to rank them critically).

Obviously there’s always plenty of movies I don’t get around to watching, so if a big one is missing, that’s why.

2017 Movies I saw in the theater this year: The Post, I, Tonya, Molly’s Game and Phantom Thread.

Movies I Either Worked On Or Know People Involved With So I Didn’t Include: Bus Party To Hell, In Memory Of, The Beast, Still/Born

Number of Times I saw a movie in the theater (including repeat viewings and classic films): 106

Number of Movies we covered on Piecing It Together (released episodes only): 41

2018 started off slow but honestly looking at this list, the quality doesn’t really drop off until the 40s, which is pretty amazing. There’s been some years that I had trouble even making a Top 10! Now that’s not to say I LOVED the Top 40, but I at least liked them. Probably love up until somewhere in the 20s. Still, that’s a great year in my book.

Most years I do an Albums list and a Video Games list as well, but lets just say between my own music and getting this podcast going, I’ve been pretty busy and haven’t kept great track of those things. What I can tell you is every video game I’ve played this year has been on Nintendo Switch except for the new God Of War (which i never did finish), and as far as new albums are concerned, I probably listened to the A Star Is Born soundtrack more than any other 2018 release.

What a great year. Can’t wait for 2019! And before I go, remember, if you haven’t yet, listen to my 2018 Top 10 Lists Special Episode featuring Josh Bell and Jason Harris!