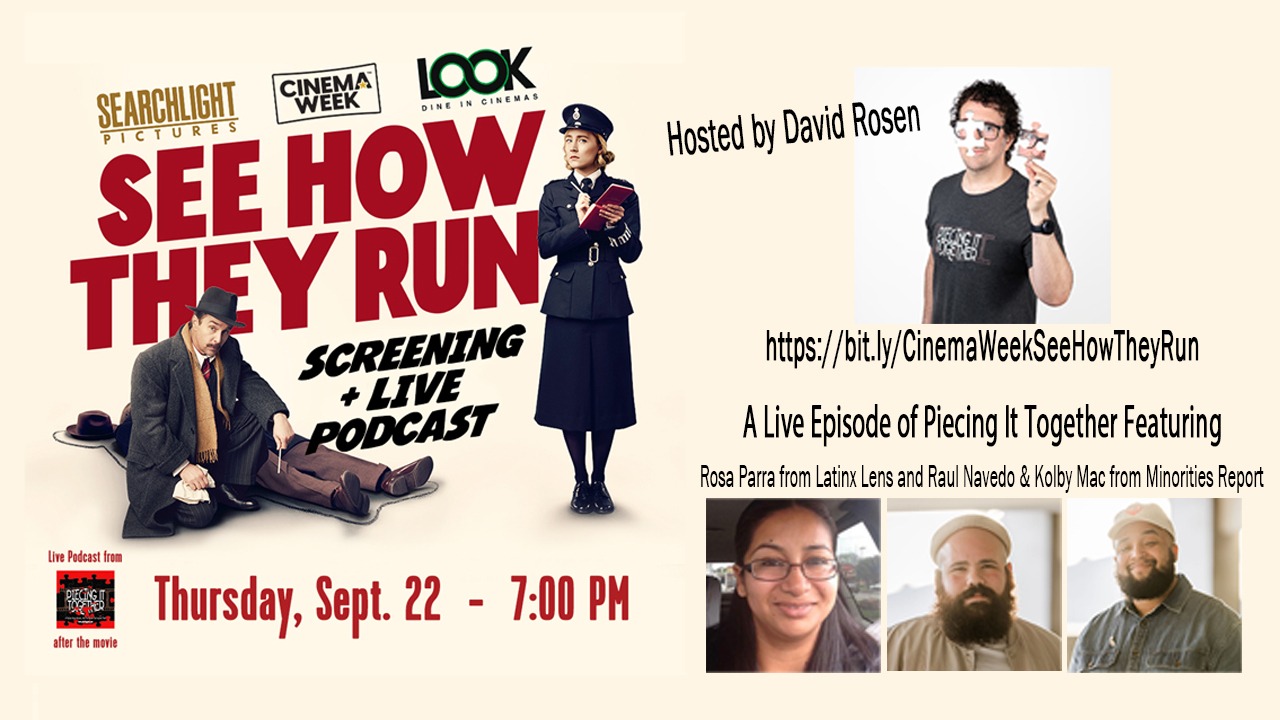 On Thursday, September 22nd at 7pm at LOOK Dine In Cinema in Glendale, CA, after a free screening of Searchlight Pictures’ SEE HOW THEY RUN hosted by Cinema Week, the Piecing It Together Podcast will discuss the films that may have been the inspiration for director Tom George and writer Mark Chappell in coming up with this throwback murder mystery whodunnit. Piecing It Together host David Rosen will be joined by Rosa Parra from Latinx Lens Podcast and Raul Navedo and Kolby Mac from The Minorities Report Podcast, making for a fun, informative conversation that will give listeners a great list of other films to check out after watching SEE HOW THEY RUN.

RSVP for FREE Tickets at https://bit.ly/CinemaWeekSeeHowTheyRun

Rosa is a Chicana Rotten Tomatoes-approved freelance film critic. She’s a member of various film critic groups including HCA (Hollywood Critics Association), LEJA (Latino Entertainment Journalists Association), GALECA, and OAFFC (Online Association of Female Film Critics).  She’s the founder and co-host of the Latinx Lens podcast (which is dedicated to highlighting Latino representation and contribution in film and tv). She also contributes to ITOL (In Their Own League) and The Daily Chela.
Twitter – @rosasreviews

Raul is a Hispanic critic who was raised in a combination of Puerto Rico and the Northeast. He majored in film production, with a focus on writing and directing, and has worked on numerous projects of varying size and scale. He is the co-founder & editor-in-chief of Minorities Report as well as the producer of the Minorities Report Film podcast.
Twitter – @TheRaulNavedo

I was born in Miami, raised in NY and like to say I became a MAN in LA. And look at that, I’m back in LA after 15 years away. Am I a MAN again?! I’m a Film & TV Critic, Actor, Screenwriter, Producer, Super Podcaster and a proud GirlDad. I love storytelling in all its forms. The story of how a boy became a man, a man became a dad, and what happens next. So what does happen next? Follow my journey as I digest stories in every medium, from as many people, and of all things celebrating life and art and all it’s dopeness. And when they Ask you where you Heard it from, Tellem’ KolbyToldMe!
Twitter – @kolbytoldme

We hope to see you at the show and it will also be posted as a podcast episode on Monday, September 26th, 2022!